An editorial grabbed my attention recently.  Titled, "The Right Way to Balance the Budget" the piece was published on page A13 of the Wall Street Journal on December 29th.
Three scholars from the American Enterprise Institute (AEI) collaborated on the aforementioned article.  They examined the likelihood of success coming from three choices we have to address our deficits and the national debt.

The choices of course are: tax increases, spending cuts, or a combination of both.

Messrs. Biggs, Hassett and Jensen conclude the primary way to fix our fiscal predicament is singular in nature -- cut government spending.  Period.  (Although they'd hasten to add that the type of spending cuts implemented does matter).  According to their thesis, the notion of raising taxes, or even using a combination of tax raises and spending cuts -- will not work.

The case for cutting federal (and state) government spending has been simple -- increasing revenues for the government without statutory spending restraints, will only result in continued spending because historically, government reverts to its spendthrift ways when it is not legally shackled to do otherwise.

Remember, we had a balanced federal budget as recently as 1998 and ran surpluses for a few years but Congress and the Executive branch of government failed to continue a fiscally responsible path, so here we are in 2010 facing a 14 Trillion dollar monster.

No wonder many Americans believe that neither Congress, or any President can be trusted to remain fiscally responsible.  So, what about the experience of other industrialized, debt-laden countries?  Here's the verdict from the AEI authors who analyzed the history of debt consolidations attempted in 21 nations over the course of 37 years...

Some observers predict that this is precisely the sort of compromise (i.e. arriving at a closely weighted mix of tax increases and spending cuts) which will be hatched by pols in Washington trying to tackle our own debt problem (or appear as though they are).

Biggs-Hassett-Jensen conclude that nations achieve fiscal balance only after applying austerity measures which include a minimum 85% reduction in spending cuts.  In other words, no more than 15% of the total solution, comes from tax increases.  They also hold that nations achieve these cuts primarily by responsible reduction of social transfer payments.

Surprised?  We have to significantly reduce spending now to avoid much more devastating pain later, because nations don't tax their way to solvency.

Posted by JOHN J. MADDENTE at 5:05 PM Links to this post

Public Notice - the bankrupting of America

Public Notice is "an independent non-profit dedicated to providing facts and insight on the economy and how government policy affects Americans’ financial well-being." 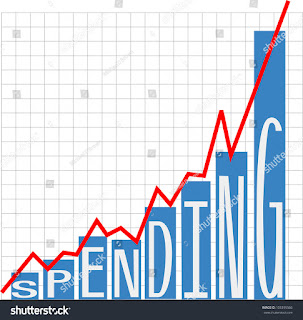 Posted by JOHN J. MADDENTE at 12:10 PM Links to this post

JOHN J. MADDENTE
I use this site to post opinions on a variety of topics and as an archive for articles or comments published in print or on other web sites. Email me at jmaddente@wi.rr.com -- or visit http://twitter.com/johnmaddente -- Thanks for visiting maddente.com DISCLAIMERS: The views expressed on this site are the views of the author or the writers referred to. Some hyperlinks go to outside sites and I'm not responsible for their content. Copyrighted material in outside links is the property of the copyright-holder. © 1994-2020 John J. Maddente ‒ All rights reserved.