A book about the people behind the Biltmore Estate

The Last Castle by Denise Kiernan 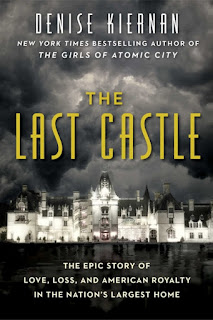 Still the largest private residence ever constructed in the U.S. at 175,000 square feet; Biltmore Estate continues to hold public imagination.  I'd always thought mistakenly, that Biltmore was built at the behest of the family patriarch Cornelius Vanderbilt (aka "The Commodore").

In fact it was his grandson, George W. Vanderbilt, who acquired some 125,000 acres in North Carolina's western countryside among the Blue Ridge mountains, upon which the mansion was constructed.

One alert, as other reviewers have noted, this book has less detail concerning the construction process, materials, architectural features and maintenance requirements of the structure, than one might've expected (and hoped for) from the title.

A fuller indication of Ms. Kiernan's narrative focus is revealed by her subtitle, "The Epic Story of Love, Loss, and American Royalty in the Nation's Largest Home".

For some stunning modern day visuals of the Biltmore estate (now part of a mere 8,000 acres at Ashville, NC); have a look at the Biltmore Company website found 🠊here.